ON TV IN THE STATES: BIDEN TOUTS LOCAL IMPACTS OF BIPARTISAN INFRASTRUCTURE LAW

ON TV IN THE STATES: BIDEN TOUTS LOCAL IMPACTS OF BIPARTISAN INFRASTRUCTURE LAW

WJW Anchor in Ohio: “The President says the project will help support more than 1.3 million jobs and create significant economic health and recreational benefits. We need that.”

WASHINGTON, D.C. — Yesterday, President Biden traveled to Lorain, Ohio to discuss the impact of the Bipartisan Infrastructure Law on working and middle class families, including $1 billion in investments for accelerated cleanup and restoration efforts in the Great Lakes region. Local television coverage throughout the Great Lakes region – including in Ohio, Wisconsin, Pennsylvania, Michigan, Indiana, and Illinois – highlighted how these investments will deliver environmental, economic, health, and recreational benefits for communities throughout the region, from the cleanup of Torch Lake in Michigan to restoration of sites along the Black River in Ohio.

Watch coverage of the President’s announcement from local television stations across the Great Lakes region below: 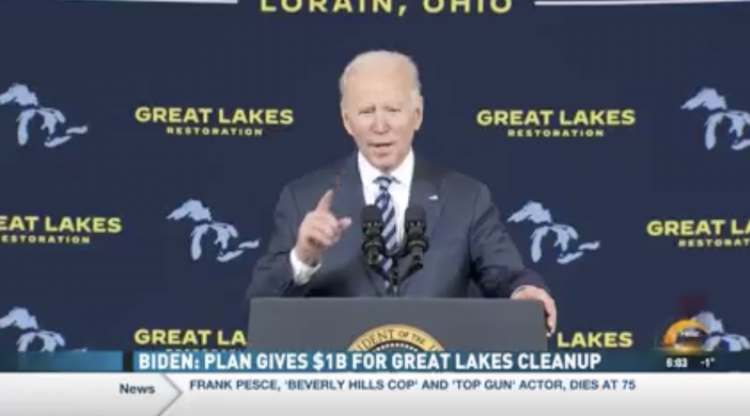 WEAU Anchor: “President Biden says a $1 billion infusion from the Bipartisan Infrastructure Deal would restore the Great Lakes’ harbors and tributary rivers that have been polluted by industrial toxins The president spoke in Lorain, Ohio this week, venturing close to the banks of Lake Erie. He pledged that the investment in cleaning the waterways was as much about jobs as the environment. Biden said the Bipartisan Infrastructure Bill is creating good-paying jobs while strengthening the supply chains.” 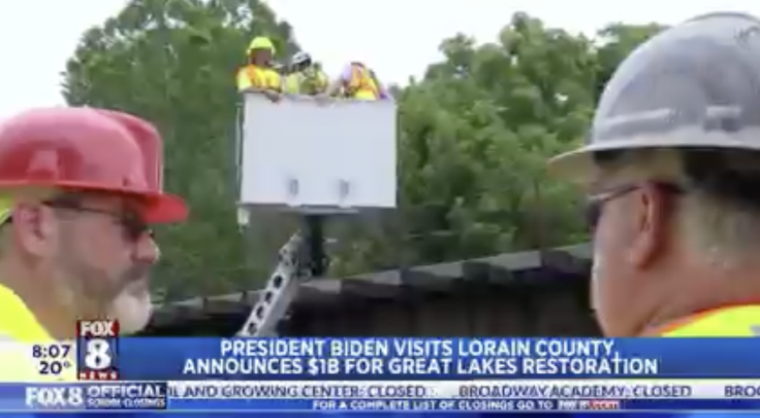 WJW Anchor: “President Joe Biden visited northeast Ohio yesterday announcing a $1 billion dollar clean-up and restoration effort along our beautiful Great Lakes. The President and the head of the EPA stopped the shipyards in Lorain. We had it live for you noon yesterday along the Black River to make this announcement. Money for the work will come from the Bipartisan Infrastructure Law that was passed last year. Sites include areas along the Black River and Cuyahoga River, calling the Great Lakes a vital economic engine. The President says the project will help support more than 1.3 million jobs and create significant economic health and recreational benefits. We need that.” 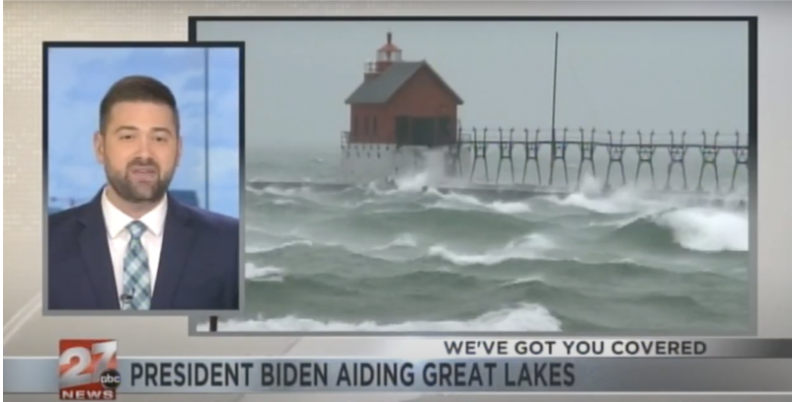 WKOW Anchor: “President Joe Biden is including $1 billion dollars in his infrastructure plan to help clean up the Great Lakes. Most of that money will go towards restoring harbors and rivers polluted by industrial waste. Support for the cleanup is one issue congressional Democrats and Republicans repeatedly agree on…31 U.S. toxic hot spots have been designated around the Great Lakes. That includes right here in Wisconsin, in Minnesota, and Illinois as well.” 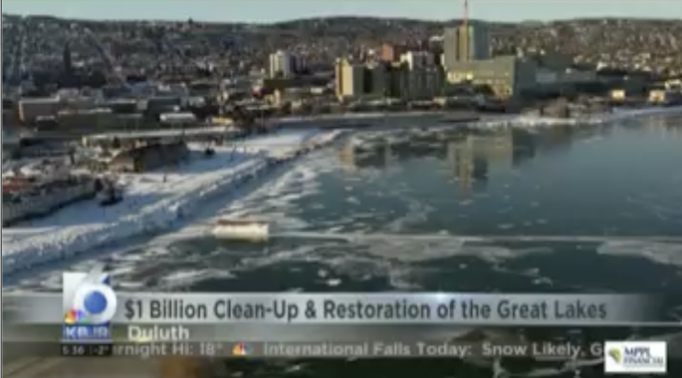 KBJR Anchor: “The Great Lakes – an essential asset for millions of residents across multiple states. But years of industrial use has caused major damage to the water boundaries. But new funding announced Thursday will help begin restoration. President Biden has announced an investment of $1 billion dollars into cleaning up and restoring the Great Lakes as well as numerous water reservoirs. The bulk of funding is targeted for what the Environmental Protection Agency calls severely degraded ‘areas of concern’ which includes the St. Louis River estuary in the twin ports impacted by contaminated sediment. Senator Tammy Baldwin of Wisconsin says this major investment is a necessity…Duluth city officials agree that this work is much-needed. They point to the shoreline trails in Morgan Park as one area that has already benefited this kind of restoration but still needs attention.” 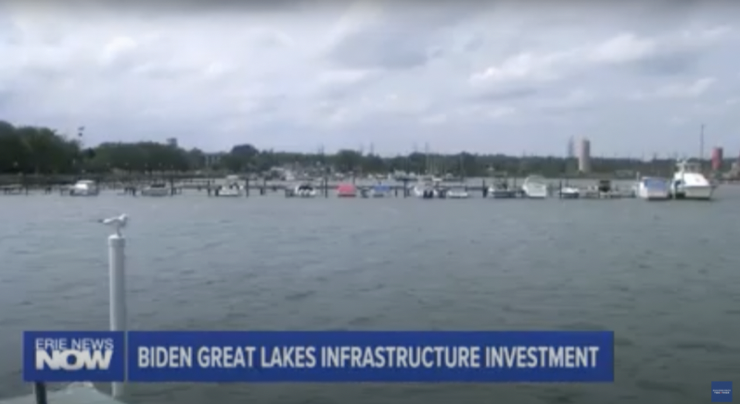 WICU Anchor: “President Joe Biden visited Lake Erie in the Buckeye State this afternoon, talking about how $1 billion dollars from the Bipartisan Infrastructure bill is going to help clean up our Great Lakes. Most of that money will go towards areas of concern along the Great Lakes which have been riddled with issues like pollution and poor wastewater management issues that have been impacting the local habitat, clean water, and even the local economy. So far six of these areas of concern including Erie’s Presque Isle Bay have been addressed, but Biden says these additional funds will help clean up 22 of the remaining 25 areas of concern.”

WLUC Anchor: “Cleanup at Torch Lake in Houghton County is getting a boost. President Joe Biden says the Bipartisan Infrastructure Law will pump $1 billion into the Great Lakes Restoration Initiative. Torch Lake is one of the 31 U.S. toxic hotspots designated around the Great Lakes in 1987. The EPA says by the year 2030, work should be finished at Torch Lake.” 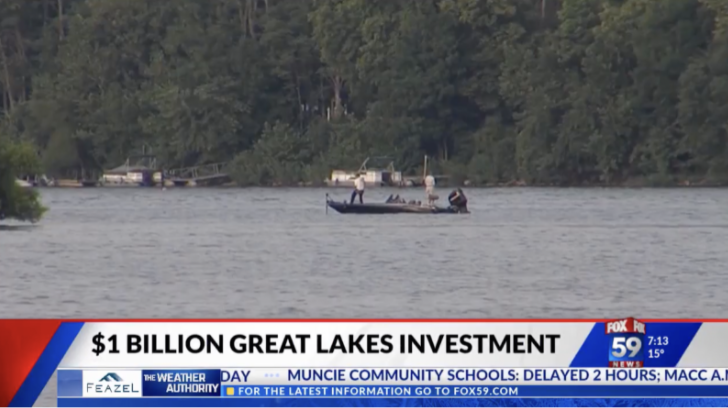 WXIN Anchor: “A billion dollars in federal money will go toward restoring the Great Lakes. President Biden visited Ohio making that announcement. The funding will accelerate the cleanup efforts across six states, including Indiana. 22 locations should see projects completed by 2030 and that includes restoration efforts at the Grand Calumet River in Gary. The bulk of the new funding will accelerate the cleanup of polluted water. The Great Lakes provide drinking water for 40 million people and are a key piece of the economy in eight states and two Canadian provinces.” 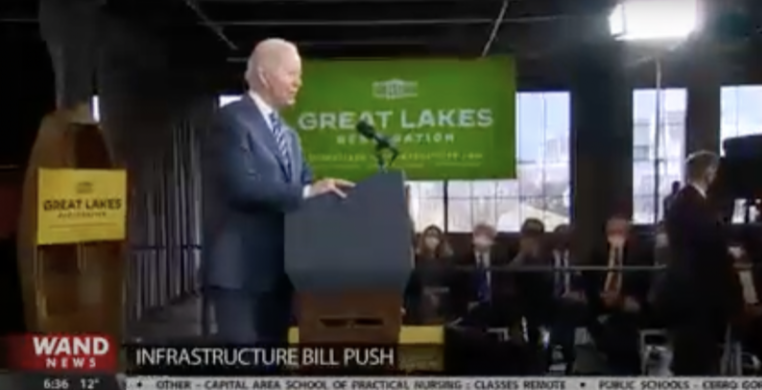 WAND Anchor: “President Biden is promoting his trillion dollar infrastructure plan in the Midwest. He announced $1 billion dollars will go to the Great Lakes region to fund restoration along Lake Erie. The President says the bipartisan infrastructure package is creating good-paying jobs while strengthening the supply chain. The President also says this plan will support chip manufacturing plans.”