WASHINGTON, D.C. — This week, White House Infrastructure Coordinator Mitch Landrieu traveled to Milwaukee, WI, to highlight the ways the Bipartisan Infrastructure Law President Biden signed last year is delivering for Wisconsin families – including by removing lead pipes. Landrieu was joined by local leaders and residents who thanked President Biden for his commitment to fixing the issue of lead pipes and signing legislation to make it happen. The Bipartisan Infrastructure Law includes $143 million this year alone to meet water infrastructure needs in Wisconsin, including $79 million that can be used to eliminate lead pipes.

Building Back Together launched a six-figure TV and digital ad in Wisconsin earlier this week featuring a Milwaukee mother praising President Biden for signing the Bipartisan Infrastructure Law, which addresses issues like lead pipes while creating good-paying jobs.

See more from the event below:

Up North News: White House Official Talks Up the Many Benefits Coming to Wisconsin from Biden’s Infrastructure Law
Former New Orleans Mayor Mitch Landrieu visited Milwaukee to highlight one example of how the bipartisan package and the American Rescue Plan will benefit Wisconsin. Together, the investments will bring $9 billion to Wisconsin over the next five years, Landrieu said, to improve roads, bridges, railways, waterways, ports, airports, and more. Other projects include initial clean-up for a Superfund site in St. Croix County, an expansion of the Apostle Islands National Lakeshore trail network, funding for Great Lakes restoration, providing 1.2 million Wisconsinites with access to high-speed internet—and $841 million to eliminate lead pipes throughout the state.

Urban Milwaukee: Biden’s Infrastructure Czar Visits City, Touts Lead Lateral Funding
“The idea is pretty simple from the president. He thinks America’s best days are ahead. He thinks we can do great things when we come together, across race, across geography, across party. And then when we find common ground, we can build an America better than she ever has been,” said Landrieu, senior advisor and infrastructure coordinator.

Wisconsin Public Radio: Wisconsin set to receive over $48M to replace lead pipes
“The bipartisan infrastructure law will help pick up the pace of this work so that we can replace more lead service lines each and every single year, and allow us to expand our program beyond its current limitations,” Milwaukee Mayor Cavalier Johnson said at a press conference Wednesday.

FOX 6: Milwaukee replacing lead pipes; federal funds to help
[Landrieu] is pitching the $1.2 trillion bipartisan infrastructure law Congress passed last November. “They are actually just taking poison into our homes. It ought to just break you down. There are 179,000 of them in Wisconsin,” Landrieu said of lead laterals. The law will send Wisconsin roughly $50 million a year for the next five years to replace lead pipes. It will be disbursed by the state and that process might not take place until this fall.

Spectrum News 1: Milwaukee mother happy to see lead pipes removed because of funding from infrastructure bill
Mitch Landrieu, the senior advisor for President Joe Biden, believes the removal of lead pipes is vital to the next generation. “When we put our minds to it, and put our shoulder to the wheel, we can actually do big things because all 330 million plus of us are a part of this mosaic that we call the United States of America that all for us need each other and it starts with our kids,” said Landrieu.

WISN 12 News
“Today federal officials announced Wisconsin is receiving $79 million this year for lead pipe replacement with Milwaukee in line to receive a big part of that Milwaukee has been working for years to replace the lead laterals, the pipes teams but it’s hoped this new funding will greatly accelerate that process.” 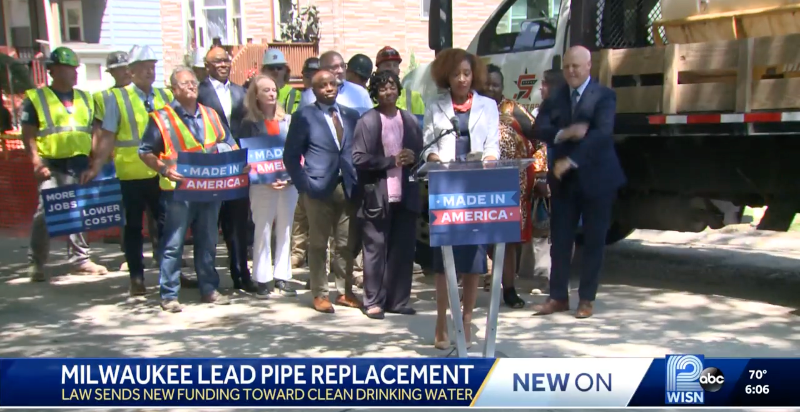 FOX 6“Poisoning from lead pipes continues to be a real concern in Milwaukee. Today, a White House adviser came to the city to praise federal funds coming to replace some of them…With the $1.2 trillion Bipartisan Infrastructure Law, more money will be coming to the Badger State – roughly $50 million a year for the next five years.” 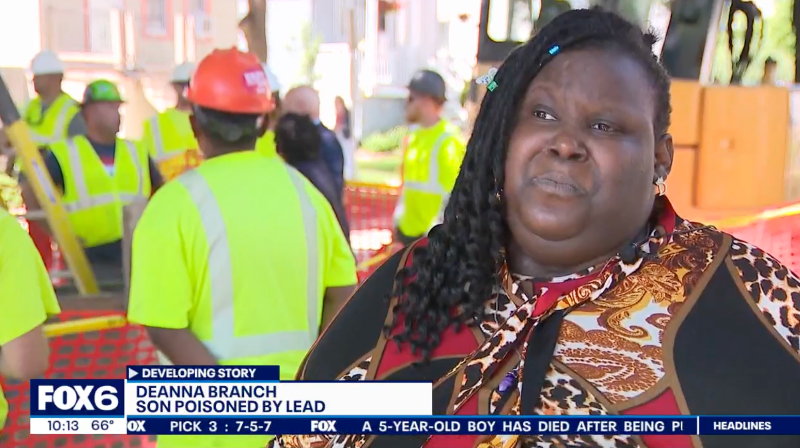