WASHINGTON, D.C. — Building Back Together is launching a new TV and digital ad campaign highlighting investments in the Bipartisan Infrastructure Law President Biden signed last year that will replace lead pipes and ensure access to clean drinking water. The 60-second ad, “Everything,” shares the story of Deanna, a mother in Milwaukee whose family has suffered as a result of lead pipes in her home, a problem which has disproportionately harmed Black and Latino communities for decades. There are an estimated 176,000 lead pipes in Wisconsin, and 67,000 lead service lines in Milwaukee alone. The Bipartisan Infrastructure Law invests $143 million in 2022 alone to meet water infrastructure needs, including $79 million that can be used to eliminate lead pipes.

The ad campaign comes as White House Infrastructure Coordinator Mitch Landrieu travels to Milwaukee for an event highlighting how the Bipartisan Infrastructure Law is delivering for families, including by replacing lead pipes. The six-figure investment on television and digital will communicate to Black and Latino communities across Wisconsin, who are disproportionately affected by lead contamination. 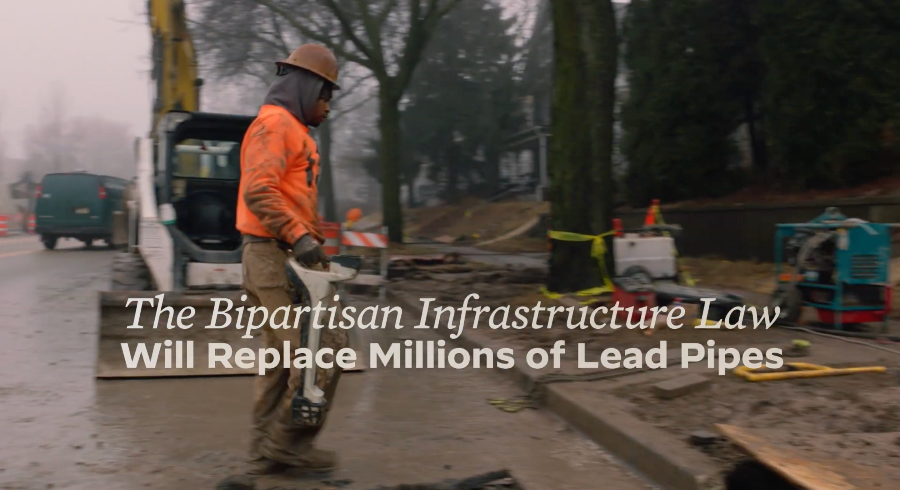 “Every household in America deserves access to clean, safe drinking water, but for far too long, lead pipes have poisoned kids and harmed families just like Deanna’s,” said Building Back Together Executive Director Danielle Melfi. “Thanks to the Bipartisan Infrastructure Law President Biden signed last year, funding is on the way to replace lead pipes in Milwaukee and across the country. These critical investments are just one example of how the Biden-Harris Administration is fighting to improve the lives of working and middle class families nationwide.”

This effort builds on the more than $30 million in investments to date from Building Back Together communicating to Americans about President Biden’s policy agenda, including the Bipartisan Infrastructure Law.

My name is Deanna Branch.

I have two young boys and their health is everything to me.

Aidan has had to be hospitalized twice for lead poisoning.

We found that the water in the house was coming from lead pipes that were making us sick.

Simple everyday things like cooking, drinking from the tap, brushing your teeth is impossible with lead pipes.

How could this happen in America?

The truth is there are millions of families that go through this.

The infrastructure law that Joe Biden passed will replace millions of lead pipes that carry our drinking water.

That’s creating more jobs. That means that no more kids will be affected the way that Aidan was affected.

This is real. They’re really doing something. They’re doing it because it’s
the right thing.

We have a president that cares about families like mine and that’s Joe Biden.