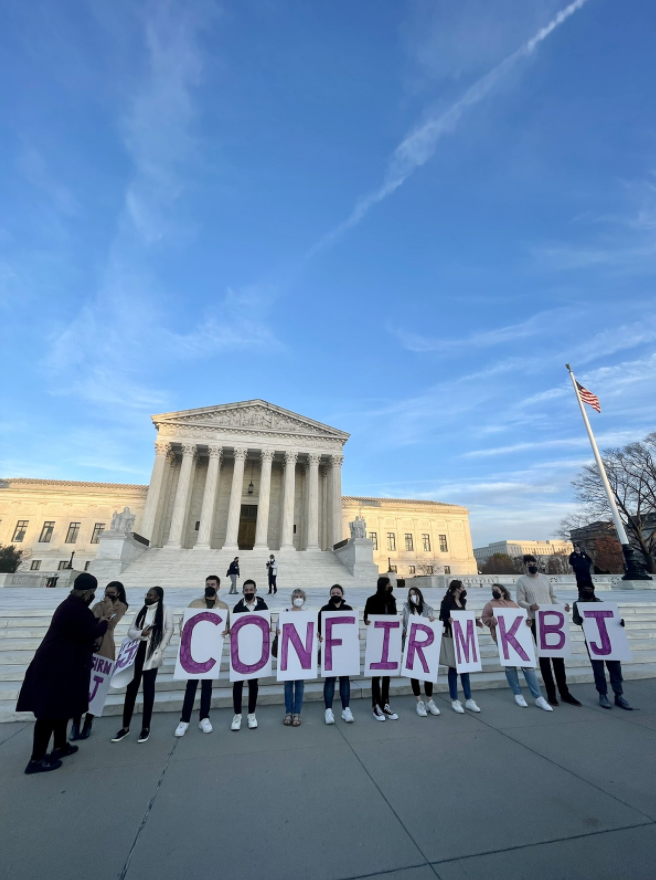 WASHINGTON, D.C. — On Friday, President Biden announced his nomination of Judge Ketanji Brown Jackson to the Supreme Court. Judge Jackson, who will be the first Black woman to serve on the Supreme Court when confirmed, received high praise from both Democrats and Republicans, with experts citing her exceptional credentials, unimpeachable character, and unwavering dedication to the rule of law. As President Biden said during his remarks, “She strives to be fair, to get it right, to do justice.”

President Biden’s nomination of Judge Jackson to the Supreme Court was met with praise from members of both sides of the aisle. Take a look:WJLA: ‘She’s ready and we’re ready’: supporters praise nomination of first Black woman to SCOTUSThe US Supreme Court served Friday night as a backdrop for unbridled joy as Judge Ketanji Brown Jackson supporters celebrated her historic nomination.“Yes, my heart is beating so fast right now,” Undrea Hilliard said.[…]Reverend Camille Henderson-Edwards, while visiting DC, wanted to see the US Supreme Court to soak up this moment.“Representation in this form matters,” Henderson-Edwards said.Reverend Henderson-Edwards hopes young girls of color will now see themselves in Judge Jackson and know that they too can ascend to the highest court in the land.

Supporters of the D.C.-born judge who is the first Black woman selected to serve on the court were expected to celebrate outside the Supreme Court Friday night.

“This is the addition of someone who I think is bringing incredible experience to the court and experience that is missing — a former public defender, a judge who’s actually had the experience of sentencing someone and knowing what that means,” she said.

Axios: First look: Jackson gets heavyweight Republican backerJudge Thomas R. Griffith, a retired Bush appointee to the Court of Appeals for the D.C. Circuit, endorsed Judge Ketanji Brown Jackson’s nomination to the Supreme Court in a letter written to the leaders of the Senate Judiciary Committee, Axios has learned.[…]​​Griffith wrote: “Judge Jackson has a demonstrated record of excellence, and I believe, based upon her work as a trial judge when I served on the Court of Appeals, that she will adjudicate based on the facts and the law and not as a partisan.”

CNN: EXCLUSIVE: Prominent conservative judge who advised Pence on the 2020 election endorses Biden’s Supreme Court nomineeThe Biden White House is getting a major endorsement for Supreme Court nominee Judge Ketanji Brown Jackson from a prominent conservative.In a statement obtained exclusively by CNN, retired federal Judge J. Michael Luttig, considered a luminary in conservative legal circles, enthusiastically endorsed Jackson, describing her as a candidate who is “eminently qualified to serve on the Supreme Court of the United States.”“Indeed, she is as highly credentialed and experienced in the law as any nominee in history, having graduated from the Harvard Law School with honors, clerked at the Supreme Court, and served as a Federal Judge for almost a decade.” Luttig added.

Three times the Senate has confirmed Judge Ketanji Brown Jackson – twice unanimously.
Now, an evenly divided Senate will face the task of confirming Judge Jackson to the highest court in America and, in the process, make her the first Black woman to serve on the U.S. Supreme Court.

“This is a great day for African American women and for all others who believe in equality and justice,” added NNPA Chair Karen Carter Richards. “Judge Katanji Brown Jackson is not only the best-qualified candidate, but she also brings a perspective that is not present currently on the Supreme Court. The NNPA salutes President Biden for this historic nomination.”

“Janna and I are incredibly happy for Ketanji and her entire family. Our politics may differ, but my praise for Ketanji’s intellect, for her character, and for her integrity, is unequivocal,” Ryan said in a tweet.

President Joe Biden pledged to nominate the first Black woman to the high court during his 2020 campaign, and voters support him doing that:  63% favor the move, while 28% oppose it, according to the latest Fox News poll.

Biden nominated the first African American woman to be the next Associate Justice of the U.S. Supreme Court on Friday.  If confirmed, Judge Ketanji Brown Jackson would replace Justice Stephen Breyer, who announced his retirement in late January.

President Biden’s nomination of Judge Ketanji Brown Jackson to the Supreme Court is historic, fulfilling his campaign pledge to appoint a Black woman. As he said in January, the move is “long overdue.”

That the Supreme Court could now look a little more like America is worth celebrating, not least for how it might help preserve the public trust in the institution, which has taken a beating in the eyes of the country. The court’s integrity would be further enhanced if senators approached the confirmation process not as a partisan battle but as the constitutional duty it is.

It is with profound joy that I write these words today: Judge Ketanji Brown Jackson has been nominated to become our nation’s first Black woman Supreme Court Justice. From a pool of outstanding Black women attorneys, jurists and legal scholars, President Biden has chosen Judge Jackson for her stellar credentials and brilliant legal mind. We are overjoyed by this nomination; now the Senate needs to move quickly to confirm her. In the coming weeks we will all get the opportunity to learn more about Judge Jackson’s story and her record.

President Joe Biden’s Supreme Court nominee – Judge Ketanji Brown Jackson – broke ground on Friday as the first Black woman picked for the nation’s highest court. If confirmed to succeed Associate Justice Stephen Breyer, she will join a cohort of women like Motley who confronted racial and gender discrimination over the course of distinguished legal careers.

Like Motley, Jackson, a judge on the U.S. Court of Appeals for the D.C. Circuit, may well serve as a role model to younger generations.

“Today, I proudly stand on Judge Motley’s shoulders,” Jackson said at the White House, noting that she shared not only a birthday with the civil rights icon but also “her steadfast and courageous commitment to equal justice under law.”

Angela Onwuachi-Willig: “She would bring a tremendous amount to the court. And apart from her exceptional credentials and exceptional legal mind, she brings so much diversity to the court. She brings a unique perspective as a black woman with unique experiences.”

Fatima Goss Graves: “The emotion is real, but also just watching her today, you’re reminded this is someone who’s not just qualified – who’s overqualified – who has exceptional credentials and who has been confirmed three times by the Senate, including just last summer. And so it’s also exciting because you can see that this will be a reality. She will be our next Supreme Court Justice.”

Maya Wiley: “Remember that in the absence of thinking about all the experiences that people in this country have, what we have is a bench, is a court, that essentially only represented for a very long time in the history of this country the experiences of white men. Because what judges do and what justices do where they’re filtering the facts through the law is they’re looking at it through a lens of how you understand the world…by having a Thurgood Marshall who helped Sandra Day O’Connor understanding where we are in race, that our laws have to be really looked at through the lens of human experience to get it right so that the opinions have the impacts that are intended. And that’s what Judge Ketanji Brown Jackson does.”

Patrick Gaspard: “I have to tell you that I am really glowing about this choice. It’s an exciting choice in two respects. One, she is just eminently well qualified as somebody who has been in the federal appeals court system. She clerked for the Justice that she’s replacing. This is a former editor of the Harvard Law Review. She’s served in private practice and most critically, she’s going to be the very first public defender to sit on the Supreme Court. This is somebody whose qualifications are unassailable…”