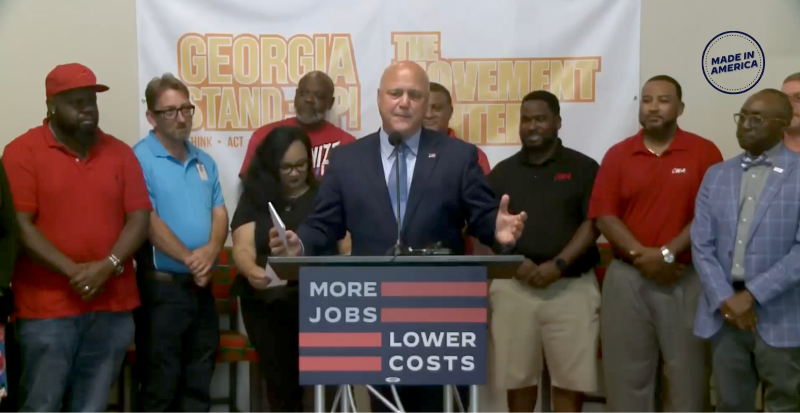 See what speakers at the event had to say about these historic investments thanks to President Biden:

“I can build a bridge, but can you build a better bridge? Anybody can lay internet, but can you build a better internet? Anybody can try to clean up the water, but it depends on where the water is, and who’s getting the benefit of what we’re doing. So when the President says better, he means equity which means everybody, white, black, black belt, Delta, Appalachia, wherever you might be in the tribal community. If you have been not seen, he wants to see you. It also means making sure that we have high paying jobs. That’s why our union brothers and sisters are here. And he wants to make sure that those jobs go where they’re supposed to go because it lifts up communities. He also wants to make sure that we build it with products that are made in America because when you build stuff with products that are made in America, by people in America, you build a better America,” said Mitch Landrieu, White House Infrastructure Coordinator and Senior Advisor to the President.

“Two things our community desperately needs are investments to expand digital access and increase access to affordable transit, public transit. That is what the [Bipartisan Infrastructure] Law does. Plus, it will create thousands of good paying jobs and union jobs….,” said Deborah Scott, CEO of Georgia STAND-UP.

“President Biden likes to call the law the blue collar blueprint for America. I couldn’t agree more. This law is getting to work right here, right now. For the CWA, this funding from the Bipartisan Infrastructure Law means more union jobs in all kinds of industries in our states. President Biden’s Bipartisan Infrastructure Law is helping to rebuild Atlanta’s roads and bridges so we can all get to work faster and safer. It’s expanding access to affordable high speed internet for households of thousands of families. These projects are going to benefit our communities for decades to come. They’re an investment in the people of Atlanta,” said CWA Local 3204 President Ed Barlow.

“Right now, I pay $140 a month for internet at my home. Just internet, not cable. This makes affording everything else we need just a little bit harder. That’s why I am so grateful that President Biden has delivered these investments that are going to expand accessible, affordable high speed internet. With this program, we’re going to have a little bit more breathing room in our budget,” said Katrina Pettway, an Atlanta resident.